Nuria Castán, Rider of the International Team of Head Snowboards, last weekend was held in Les Arcs (France) the first contest of Freeride FWQ circuit in Europe, in this contest all the Riders within the Top10 that are competing in Europe their main tests, were the best Riders of the circuit in the Europe / Oceania Division.

The competition was held in perfect conditions for what it does to the state of the snow, some wind in the highest parts and a visibility not 100%, but very good for the development of the programmed descents.

Of the 95 riders of the four categories, in snowboad women there were a total of 10 riders, with the six or seven best riders in the world.

Castán made a very fast descent in the upper part with great speed and control, in the intermediate zone he made some channels with a lot of risk and in a very technical area, in fact only she of its category managed to go down those channels, in the lower section of the descent made two jumps with stones of average size that were received perfectly.

The line chosen for the descent was considered one of the most original of its category, obtaining at the end a score of 71 out of 100, the next classified was one point away from it, which denotes the equality in the competition, among the four first there was only a difference of 4 points.

The results of the FWQ 4 * a les Arcs competition (France) are shown in the attached table: 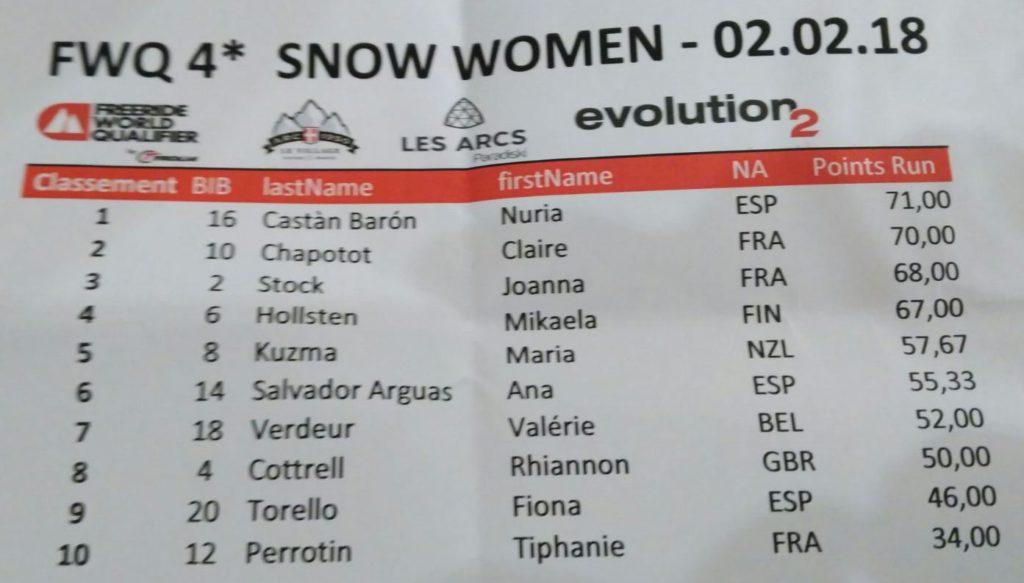 This fantastic result, the most important of his sporting career so far, maintains it in a prominent way in the first position in the ranking 2018 of the FWQ, in the division of Europe / Oceania, in the following table you can see the Top 5 of The current classification after this test: 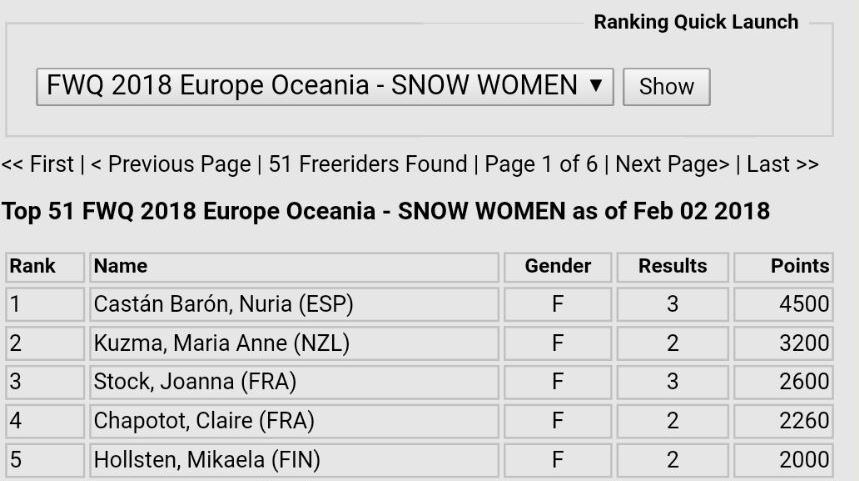 Nuria Castán with this victory becomes the first Spanish Rider to get a victory in a 4 * race of the FWQ, it is a test of the highest level, in its category of women snowboarding. With this victory Castán has already achieved victories in all levels of the FWQ, 2 *, 3 * and 4 *, in the tests of 1 * he has not participated.

Related to this victory, Nuria Castán is the second youngest Rider to win a 4 * FWQ race with 20 years, the first to achieve it with 19 years has been the ill-fated Estelle Ballet, who died last season victim of an avalanche in Switzerland).