Nuria Castán, Rider of the International Team of Head Snowboards, was this past weekend in Hochfügen (Austria) in the 4th 4* of the FWQ 2018 circuit, the face scheduled for competition was the same as last year’s (Ostwand ).

The day did not accompany much with respect to the weather conditions, it was not very sunny, without wind but without much visibility due, above all, to the clouds that did not allow a direct view to the panel of Judges about the descents of the Rider.

Nuria Castán came out with the number 12 and was the last of its category, its descent was very fast especially in the high altitudes alternating with different jumps executed without any problem, in the intermediate and low zone of the descent is where the verticality of the face was increased greatly, mainly in the area chosen by the Almoster Rider.

The Line chosen by Nuria Castán was of a great verticality, consequently the risks that were assumed were very significant, in the two channels that made only were made by a skier of the category of men and by herself, it was a line of more originals that were presented on that day, but Nuria Castán made two mistakes a Buttchek (playing with the back or legs on the ground and getting back up) in the upper channel and in the lower channel that still had more inclination, made a mistake of orientation and was wrong a couple of meters in the entrance and had to reposition using his hands.

These two mistakes separated her from the fight for the first three places, despite having made a very original line, at the level of these competitions the slightest mistake leaves you out of the positions of honor of the competition.

Despite this bad result, Nuria Castán remains in the second position of the FWQ classification (Div. Europa / Oceania) 2018, there are still 3 trials of the highest level (4 *) in the circuit that are Jasna (SVK), NENDAZ (SUI) and Obergurl (AUS).

To date she has participated in four races on the Remarkables circuit (NZ) 3rd position, Revelstoke (CAN) 7th position, Les Arcs (FRA) 1st position and Hochfügen (AUS) 6th position, the objective for the remainder of the season is to avoid As far as possible these ups and downs, although the overall assessment is very good, every year that passes, has been climbing positions in the general classification of the FWQ. 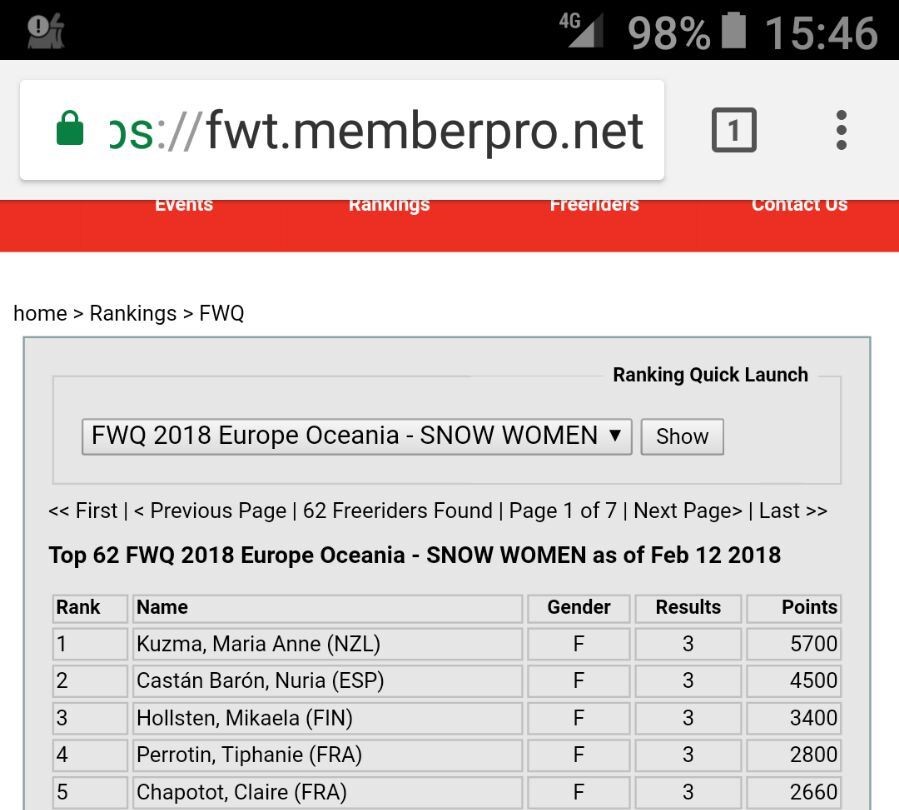 Still depending on itself, to try to get the first position in the championship 2018, there are three tests of 4* of the FWQ circuit to end the season.